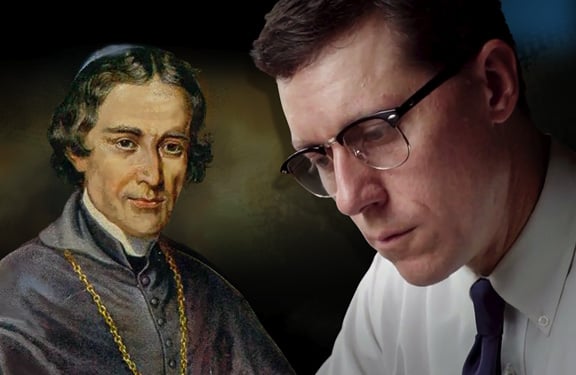 How far would you go to insure that someone you loved and admired was put on the path to sainthood?

In order to obtain the documentation necessary for Rome to process a canonization cause for his hero, Bishop Frederic Baraga (1797 – 1868), an engineer from Chicago by the name of Joe Gregorich traveled to Europe to undertake a covert operation during the Cold War. There, he was aided by the CIA to uncover and microfilm the letters written by Baraga, the famed “Snowshoe Priest” of Upper Peninsula Michigan, to missionary societies and people all over Europe before the documents could be destroyed by enemies of the Church. He even was arrested and detained by Yugoslavian police in the process!

Once Gregorich was back in the United States with the documents, he had to translate them and he didn’t let the fact that they were written in eight different languages by the saintly Bishop deter him. He just went about learning those languages.

How’s that for perseverance? All of this and lot more will be brought to life when EWTN premieres “Miracle Hunter” Michael O’Neill’s latest project: “Walking With Baraga – The Joe Gregorich Story.” (Airs 9:30 a.m. ET, Saturday, Sept. 25, with an encore at 5 p.m. ET, Sunday, Sept. 26).

Joe Gregorich, who would become a very successful engineer, was no ordinary little boy. Executive Producer/Writer O’Neill said that, as a young child, Gregorich didn’t care about cowboys and superheroes. Instead, thanks to his Slovenian mother’s stories, he grew up fascinated with the adventures of Baraga.

Not only was Bishop Baraga a hero to his own people in Slovenia, but he willingly came to the U.S. to serve as a missionary in the Upper Peninsula of Michigan, an outpost of civilization where there were no priests. This former lawyer turned priest ended up traveling thousands of miles in snowshoes to teach the copper miners and Native Americans of the region about the Catholic faith. Stories and legends of the bishop abounded.

How Gregorich went from a simple hero worshipper to promoter of the bishop’s cause for canonization is the subject of this documentary.

O’Neill says he became familiar with Gregorich while filming one of the very first episodes of his now popular EWTN series “They Might Be Saints,” which focused on Bishop Baraga. When he learned, in an interview with Joe’s daughter Pauline, all that her father did to obtain the documents that led to the Bishop being named Venerable, O’Neill decided that Gregorich’s amazing story, which could be the subject of a Hollywood movie, needed to be its own program.

Most people believe that for a candidate to get on the road to canonization, someone must figuratively whisper in the ear of the Pope to suggest a candidate and start the process. But O’Neill says that’s not how it works.

“It can take years or even centuries for a sainthood cause to advance. Normally, the only people we see canonized are nuns or priests or bishops because their congregations or communities have the people and the funds to get it done. But in case of Bishop Baraga, it was the initiative of Joe Gregorich which caught fire and now Bishop Baraga is a Venerable. He’s still in need of two miracles, one to become blessed and one to become a saint.”

But how in the world did Gregorich get the CIA involved in his quest? It was through his daughter Pauline, who worked for the CIA on a top secret operation in Germany during the Cold War. It was Pauline who, with the CIA’s permission, hosted her father, giving him a home base to operate from. It was Pauline who helped her dad get credentials through the CIA as a retired U.S. General. It was Pauline who had a front row seat to her father’s mission that took him throughout Europe on the famous Orient Express to microfilm needed documents. It was Pauline who told O’Neill in an interview about her dad’s dangerous exploits, which are chronicled in her memoirs, which form the basis of this incredible documentary.

Pauline, who is now in her 90s, told O’Neill that when Bishop Baraga was named Venerable she expected her reaction to be simply “Isn’t that wonderful.” Instead, O’Neill says “she shocked herself by breaking down in tears as she realized that her father’s life’s work on Bishop Baraga, which had started on the kitchen table of their home in Chicago, had made it onto the Pope’s desk!”
This is a story you won’t want to miss!

Can’t get enough of these stories of people who might be saints? Fans of O’Neill’s work are in luck. Also, coming out this week is “Explore with the Miracle Hunter – San Giovanni Rotondo,” which examines Padre Pio’s mystical gifts: the stigmata, bi-location and healing miracles. Lesser known details about his illnesses, his life as a teacher and a Capuchin monk, and his work on building a hospital are presented as well.

“As with other ‘Explore’ programs, viewers get a chance to see scenes of recreated miracles,” O’Neill says. “With international travel so challenging in these times, these programs provide an opportunity to see and experience some of Catholicism’s most spectacular destinations.”

These episodes, and all of O’Neill’s programs, are or soon will be available for purchase at EWTN Religious Catalogue, www.ewtnrc.com.

Finally, at 8 p.m. ET, Wednesday, October 13, look for O’Neill on “EWTN Live,” where he will talk about his new book entitled (what else?) “They Might Be Saints.” The book (Item # 82248 at www.ewtnrc.com) includes 24 stories of Venerables, Blesseds, and Servants of God in America who are on the path to canonization. “These lives of future saints are told in a fun storytelling kind of way,” O’Neill said. “I also dedicated chapters to the process of canonization and how sainthood miracles are found.”

To find out how to view the above, and all of EWTN’s programs, please go to www.ewtn.com/everywhere and click on the “Television,” “Radio,” or “Online” icons. While there, sign up to receive Wings, EWTN’s e-newsletter, and other program information so you don’t miss any of these and other exciting programs premiering now!